Key Bitcoin developer calls on FBI to recover $3.6M in digital coin by Dan Goodin
Wednesday January 4th, 2023 at 4:22 AM

One of the prominent developers behind the Bitcoin blockchain said he has asked the FBI to assist him in recovering $3.6 million worth of the digital coin that was stolen from his storage wallets on New Year’s Eve.

Luke Dashjr is a developer of the Bitcoin Core, an app that runs 97 percent of the nodes making up the Bitcoin blockchain. Bitcoin Core derives from the software developed by the anonymous Bitcoin inventor who uses the pseudonym Satoshi Nakamoto. That software was called simply Bitcoin, but was later changed to Bitcoin Core to distinguish it from the coin. Dashjr has been contributing to the Bitcoin Core since 2011 and has long championed the concept of decentralization that the cryptocurrency was founded on.

On New Year's Day, Dashjr took to Twitter to report that his entire Bitcoin holdings—worth roughly $3.6 million—were “basically all gone.” He said the hack stemmed from the compromise of a PGP (Pretty Good Privacy) key that he used to ensure that his downloads of Bitcoin Core and a smaller app known as Bitcoin Knots weren’t laced with malware. He said all his computers were compromised and urged people to hold off downloading new versions for the time being.

lywyn
reply
The whole point of Bitcoin was to be liberated from government control and laws. I call this a fail for BTC
very large rock orbiting a sun

Russia offers its untested COVID-19 vaccine for free to UN officials by Beth Mole
Thursday September 24th, 2020 at 4:08 AM

Some United Nations staff are likely brushing up on their Russian—specifically how to say “Thanks, but no thanks” in the nicest way possible.

On Tuesday, Russian President Vladimir Putin offered UN staff free doses of the country’s COVID-19 vaccine, Sputnik V, which has not completed clinical trials for efficacy and has not been thoroughly vetted for safety.

Still, Putin suggested that his offer was prompted by the desire to give the people what they want: “Some colleagues from the UN have asked about this, and we will not remain indifferent to them,” he said during a speech Tuesday at this year’s (virtual) General Assembly.

Amazon Restricts How Rival Device Makers Buy Ads on Its Site by msmash
Wednesday September 23rd, 2020 at 8:45 AM

1 Comment
Some makers of smart speakers, video doorbells and other hardware hit roadblocks buying key ads in search results on Amazon; gadgets made by e-commerce giant get edge. From a report: Amazon.com is limiting the ability of some competitors to promote their rival smart speakers, video doorbells and other devices on its dominant e-commerce platform, according to Amazon employees and executives at rival companies and advertising firms. The strategy gives an edge to Amazon's own devices, which the company regards as central to building consumer loyalty. It puts at a disadvantage an array of gadget makers such as Arlo that rely on Amazon's site for a significant share of their sales. The e-commerce giant routinely lets companies buy ads that appear inside search results, including searches for competing products. Indeed, search advertising is a lucrative part of the company's business. But Amazon won't let some of its own large competitors buy sponsored-product ads tied to searches for Amazon's own devices, such as Fire TV, Echo Show and Ring Doorbell, according to some Amazon employees and others familiar with the policy. Roku which makes devices that stream content to TVs, can't even buy such Amazon ads tied to its own products, some of these people said. In some cases, Amazon has barred competitors from selling certain devices on its site entirely. The policies show the conflicts between Amazon's large e-commerce platform for sellers and its role as a product manufacturer in its own right. While traditional retailers buy inventory from manufacturers and resell it to consumers, limiting the number of vendors they can work with, Amazon's platform has more than a million businesses and entrepreneurs selling directly to Amazon's shoppers. Amazon accounts for 38% of online shopping in the U.S. and roughly half of all online shopping searches in the U.S. start on Amazon.com. "News flash: retailers promote their own products and often don't sell products of competitors," said Amazon spokesman Drew Herdener in a written statement. "Walmart refuses to sell [Amazon brands] Kindle, Fire TV, and Echo. Shocker. In the Journal's next story they will uncover gambling in Las Vegas."

Read more of this story at Slashdot.

Kanye posts photos of his record deal amid dispute
Thursday September 17th, 2020 at 9:38 AM

1 Comment
The star says he won't release new music until he is released from his recording contract.
Read the whole story

Oracle enters race to buy TikTok’s US operations by Financial Times
Tuesday August 18th, 2020 at 11:56 AM

Oracle has entered the race to acquire TikTok, the popular Chinese-owned short video app that President Donald Trump has vowed to shut down unless it is taken over by a US company by mid-November, people briefed about the matter have said.

The tech company co-founded by Larry Ellison had held preliminary talks with TikTok's Chinese owner, ByteDance, and was seriously considering purchasing the app's operations in the US, Canada, Australia and New Zealand, the people said.

Oracle was working with a group of US investors that already own a stake in ByteDance, including General Atlantic and Sequoia Capital, the people added.

lywyn
reply
That will kill the app :)
very large rock orbiting a sun 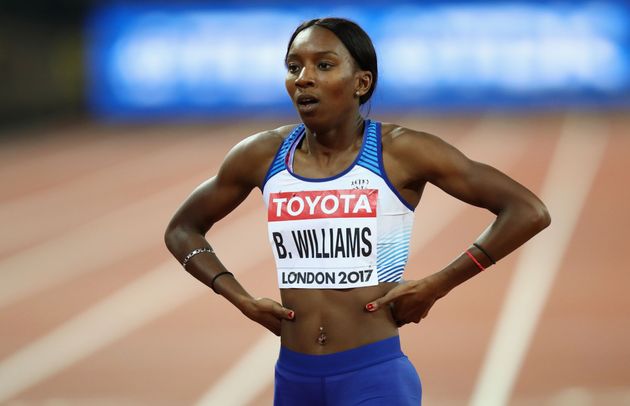 A Team GB sprinter is considering legal action against the Metropolitan Police after accusing officers of racially profiling her and her partner in a stop and search.

Williams, whose three-month-old son was in the car during the incident, called it an “awful experience” and believes the couple were targeted because they are Black and drive a Mercedes.

“They (the officers) said there’s a lot of youth violence and stabbings in the area and that the car looked very suspicious,” she told BBC Radio 4’s Today programme.

“They see a Black male driving a nice car, an all-black car, and they assume that he was involved in some sort of gang, drug, violence problem.”

Scotland Yard said a 25-year-old man and a 26-year-old woman were searched when a car was stopped in Lanhill Road, Maida Vale, on Saturday afternoon.

Both were searched, along with the vehicle, but nothing was found. Police said officers were patrolling the area in response to an increase in violence involving weapons.

The force said the vehicle was stopped after it was seen driving suspiciously, including on the wrong side of the road, and that the driver had sped off when asked to stop.

But this account was rejected by Williams, who said the car was “never” on the wrong side of the road.

“That is false, we were never on the wrong side of the road. We were driving down through single-width roads,” she told the programme.

“We only found out about us driving on the wrong side of the road once they tweeted on Saturday afternoon.

“This isn’t the first or fourth or fifth time – it must be about the 10th [time her partner has been stopped by police], it’s getting ridiculous.”

She said race was “100%” the reason he gets stopped, adding: “It’s just horrible, it’s an outrageous assumption for them to make.

“We are planning on taking it down the legal route. I feel very hurt by their actions, and to witness my partner being taken away and for me to be taken away from my son, my heart hurts.

Williams also told Sky News that Met commissioner Cressida Dick “does need to think about her position to be honest”.

Footage of the incident was shared widely on Twitter after being posted by former Olympic medallist Linford Christie, who questioned why the vehicle had been stopped.

The clip appeared to show two people – a man and a woman – being pulled out of a car in a London street.

The woman says: “He didn’t do anything” and officers can later be heard telling the woman to calm down after she worries about her son remaining in the car.

Labour leader Sir Keir Starmer said he felt “uncomfortable” about the way the officers acted and said he could see no justification for the use of handcuffs during the incident.

“When they got to the car I didn’t really think they handled it very well at all because it was clear there was a very young child in the back and the use of handcuffs is always controversial and I couldn’t see what the justification for that was.

“I don’t know what led to the stop in the first place but what I do know is that if I was a senior officer looking at that video footage I would feel uncomfortable about the way that it was dealt with.”

Scotland Yard said officers from the Directorate of Professional Standards have reviewed footage from social media and officers’ bodycams and were satisfied there was no concern around the officers’ conduct.

Commander Helen Harper said: “I understand the concern when incidents like this happen and how they can appear when part of it is filmed without context.

“Due to the concern raised, we conducted a review of the stop. This included social media footage and body-worn camera footage of the officers at the scene.

“We are satisfied that there are no misconduct issues.”

London mayor Sadiq Khan says he has raised the incident with the Met and revealed he has commissioned an action plan for improving transparency and accountability.

He tweeted on Monday: “I take any allegation of racial profiling extremely seriously and have raised Bianca Williams’ case with the Met Police.

“It is absolutely vital that our police service retains the trust and confidence of the communities it serves so that every Londoner, regardless of background or postcode can feel safe, protected and served.

“Stop and search must be intelligence-led, carried out fairly and with respect, and all officers now have body-worn video cameras to help hold them to account.”

lywyn
reply
She should, it was shocking to watch.
very large rock orbiting a sun